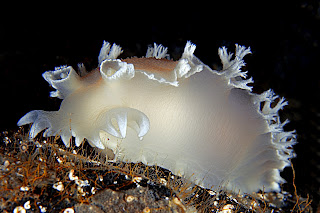 You are 100 feet down using scuba, with your dive light spotlighting the most exotic looking Sea Hare you've ever seen.

It's noon at McMurdo Station, Antarctica but it's dark at your depth because between you and the surface of the Ross Sea lies19 feet of snow-covered ice. Your dive buddy has drifted about 100 feet away, but you can see him without hindrance in the gin clear water of the early Antarctic springtime. The 800 foot water visibility also means you can easily see the strobe light hanging on the down line 200 feet away, the line leading to the three and a half foot diameter hole bored through the ice. 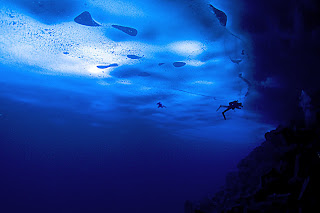 Under these conditions, you should not have to worry about your regulator, but you do, because you know that any scuba regulator can fail in 28° F water, given enough opportunity. You also know that some regulators tolerate these polar conditions better than others, and you are using untested regulators, so yours might free-flow massively at any moment.
Should that happen, you have a back-up plan; you will shut off the free flow of air from your failed regulator with an isolation valve, remove the failed second stage from your numb and stiff lips and switch to a separate first and second stage regulator on your bottle's Y-shaped slingshot manifold, after first reaching back and opening the manifold valve. Of course, that backup regulator could also free-flow as soon as you start breathing on it – as has already happened to one of your fellow test divers. 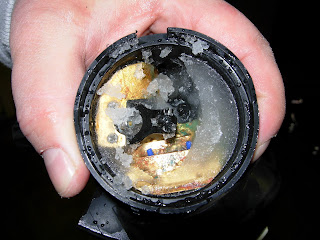 In that situation you would have no choice except to continue breathing from what feels like a torrent of liquid nitrogen, teeth aching from the frigid air chilled to almost intolerable temperatures by unbridled adiabatic expansion, until you reach your dive buddy and convince him that you need to borrow his backup regulator. Once he understands the gravity of the situation, that two of your regulators have failed, then the two of you would buddy-breathe from his single 95 cu ft bottle as you head slowly towards the strobe marking the ascent line. And of course he will be praying that his own primary regulator doesn't fail during that transit. 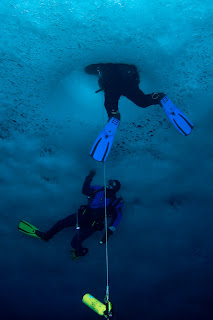 Once you reach the ascent line you are still not out of difficulty. The two of you cannot surface together through the narrow 19-foot long borehole. So you would remove your regulator once again and start breathing off a pony bottle secured to the down line. Once it is released from the line, you can then make your ascent to the surface; but only if a 1300-pound Weddell seal has not appropriated the hole. In a contest for air, the seal is far more desperate following an 80 minute breath-hold dive, and certainly much more massive than you. Weddells are like icebergs – their cute small face sits atop a massive body that is a daunting obstacle for any diver.
But you even have a plan for that — you've heard that Weddell seals don't like bubbles, and they get skittish about having their fins tugged on, and will thus relinquish the hole to you. … At least, that's what you've been told. You certainly hope he would leave before you consume the meager amount of air in your pony bottle. 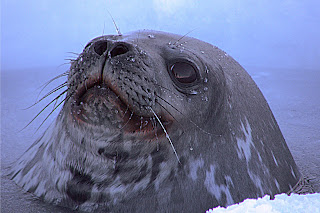 The U.S. Navy, through a Navy Experimental Diving Unit representative, was invited to observe an October 2008 series of 134 regulator test dives for the Smithsonian Institution Science Diving Program. This test series, based at McMurdo Station, was funded by the Smithsonian for the benefit of the U.S. Antarctic Diving Program (USAP). The National Science Foundation (NSF) Office of Polar Programs was a primary financial contributor. The preceding year the Smithsonian and NSF partially funded the author's travels to the high Arctic (Ny-Ålesund, Svalbard) for an Ice Diving Workshop for science divers (Lang and Sayers, 2007).
The Antarctic regulator testing expedition began with participants gathering in springtime Christchurch, New Zealand to be fitted for extreme cold weather gear, including the famous red parkas reserved for Antarctic scientific personnel who venture out on the ice. After being on hot-standby for five-days waiting for the weather to clear at McMurdo, the team finally embarked on a cavernous C-17 Globemaster for the no-frills 2400 mile trip to McMurdo. A plane departing for the ice the day before had boomeranged; they were within sight of McMurdo but could not land due to low visibility in blowing snow.
Our flight, packed full of USAP employees attempting to head south for the season, broke the bad weather spell. Conditions were clear on approach to the ice runway at McMurdo.
For first time visitors like myself, our exit from the aircraft onto the ice was just what we had anticipated – biting winds and bitter cold. The extreme weather clothing we wore could not conceal the fact that we had landed on the coldest continent on Earth, Antarctica.
At its inception in 1947 (through the US Naval Support Force Antarctica) through 1967 the USAP diving program issued double-hose regulators to NSF scientific divers. In 1991, double-hose regulators were retired from service and replaced with single-hose, modified Sherwood Maximus SRB3600 regulators. A heat retention plate was fitted over the second-stage exhaust valve and around the air delivery lever and the intermediate pressure detuned from 145 to 125 psi to reduce the probability of free-flow in supercooled sea water at -1.86oC in McMurdo Sound. The decision to investigate replacement regulators was influenced by the age of the 1991 Sherwood models, their less than optimal breathing characteristics, and the lack of continued parts availability in 2008 to avoid potentially catastrophic regulator failure.
Eleven divers from the U.S., U.K., Switzerland and Australia, three of them female, were recruited by the Smithsonian as test divers. All divers had passed extraordinarily stringent medical qualifications and logged no fewer than 10 drysuit dives in the previous 6 months.
The manufacturers represented by the test regulators were Poseidon, Apeks, Mares, Aqualung, Zeagle, and Sherwood. In all, nine regulator models were tested, all having been approved for Navy use or showing promise as cold-water regulators. All dives were no-decompression dives, and included a mandatory safety stop at 15 ft. Dive profiles were recorded on UWATEC One dive computers.
Most of the dives were conducted on the Ross Ice Shelf just off McMurdo Station, but a remarkable series of dives were conducted at the foot of a glacier a long and cold Pisten Bully's ride away, riding on narrow lanes on the sea ice marked only by flags. 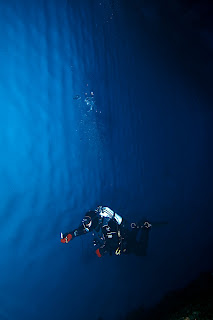 Typical dives lasted between 30 and 40 minutes at depths between 60 and 100 fsw, with one series of dives down to 165 feet using the better performing regulators. Out of 134 under-ice dives, there were 28 free-flows, for an approximately 20% free flow incidence. Some regulators performed far better than the others; regulators were dropped from testing whenever their free flow incidence reached 33%. All the Poseidon regulators and the one Sherwood regulator had a combined free flow incidence of 5%, whereas the others had a combined incidence of 44%. Two of the worst regulators reached an alarming 50% failure rate after only 6 dives each.
One of the first regulators to be dropped from testing in Antarctica was the Mares V32 Proton Ice Extreme, the subject of a recent Diving Advisory (09-07). At the other end of the spectrum, the Poseidon Xstreme was the only regulator that suffered no free flows at McMurdo, and is also the only regulator that never free flowed during NEDU's rigorous 2004 testing program for cold water regulators. The prototype Mares regulator that was the progenitor of the Proton Ice Extreme, then called the Mares Proton Ice Teflon V32 CWD, did free flow occasionally in NEDU's testing. At this point, the regulator's poor performance in Antarctica is inexplicable, however, further NEDU testing should soon reveal the cause of the problem.
Cold-water regulators are the only piece of diving equipment that NEDU tests and recommends for Navy use based solely on unmanned testing. Manned testing of new regulators by Navy divers under field conditions is simply not practical.
The Navy's participation in the Smithsonian's field trials was made possible by a Memorandum of Agreement between NEDU and the Smithsonian Institution Scientific Diving Program, Office of the Undersecretary of Science. Through this MOA the Navy provides technical information to the Smithsonian relating to cold-water regulators, and access to sophisticated equipment-testing facilities. In turn, the Smithsonian provides cost-effective, NSF sanctioned access to Polar Regions for field-testing of cold-water regulators by civilian divers.
As demonstrated by both this Antarctic dive series and ICEX 2009 recently held in the Arctic, partnering between the U.S. Navy and civilian science divers is a mutually beneficial and financially responsible way to conduct work in the harsh Polar Regions. We can anticipate this trend continuing, to the betterment of all Navy divers as NEDU pushes to qualify only the very best life support equipment.