On July 20, 1964, SeaLab I (commanded by CAPT George F. Bond) lowered to a depth of 195 ft off the coast of Bermuda after its initial test in Panama City, FL. Sealab I would build on the foundations laid during the earlier Genesis saturation-diving project. The habitat would be constructed from two converted floats and held in place with axles from railroad cars. The experiment involved four divers - LCDR Robert Thompson, MC; GM1(DV) Lester Anderson, QMC(DV) Robert A. Barth, and HMC(DV) Sanders Manning. SeaLab I was a bottom habitat, saturation diving experiment whose purpose was to evaluate human ability to work under the water at moderate depths for prolonged periods. Although the operation had to be cancelled ten days early due to an approaching storm, it was a total success. It conclusively demonstrated the feasibility of open-sea saturation diving and set the stage for SeaLab II.

This program ultimately even had a huge impact on the global economy. The SEALAB program provided the commercial diving industry with its most important tool in the exploitation of offshore oil and gas reservoirs: the ability to dive deep and stay there for extended periods of time. In the process, the Navy medical community extracted a wealth of physiological data from their human subjects. 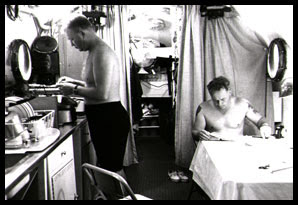 In the words of one of her aquanauts, Bob Barth:

"About Sealab One, the purpose of having that habitat built was to complete the feasibility study of putting man in the sea, no sat systems were available in the early 60's so we decided that the Cousteau concept of habitats was the best way to get someone on the bottom and leave them there. Four Navy folks occupied Sealab One for 11 days. I can tell you that those 11 days in that habitat were probably the best diving days I ever made; think about it, you travel down to 200 feet and not have to worry about bottom time, what you find sitting there is this monster house, (not something that we see very often). Bright lights, fresh water, warm showers, bunks, and plenty to eat, and nobody with a damn stop watch. She doesn't look like much now sitting out at the museum but in 1964 she was a palace. TBT 17000 +/- minutes, on the bottom." 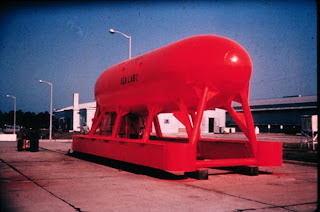 SeaLab I is currently on display at the Man in the Sea Museum in Panama City, FL.

Note: For more about the SEALAB missions read, "Papa Topside: The Sealab Chronicles of Capt. George F. Bond, USN" by George F. Bond and "Sea Dwellers: The Humor, Drama, and Tragedy of the U.S. Navy Sealab Programs" by Bob Barth.

Posted by The United States Navy Experimental Diving Unit at 10:58 AM