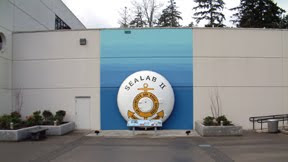 On August 28, 1965, the first of three teams of divers moved into what became known as the "Tilton Hilton" (because of the slope of the landing site) also known as SEALAB II. This first day of the operation happened to be one of the divers involved birthday; Bob Barth, who turns 79 today-Happy Birthday Bob!

SEALAB II rested at a depth of 205 ft 65 miles off the coast of LaJolla, CA. Whereas SEALAB I tested and proved the concept of saturation diving, SEALAB II provided evidence that useful work could be done. The Navy conducted physiological and psychological studies to determine man's effectiveness underwater for an extended period. Navy Divers not only evaluated the structural engineering of the habitat. They did things like working on a mock-up of a submarine hull, tested undersea tools, conducted salvage ops using syntactic foam; they set up a weather station, mined ore samples, experimented with plants, and studied ocean floor geology just to name a few things. They also experimented with a trained porpoise named Tuffy from the U.S. Navy Marine Mammal Program, to do courier work between the habitat and the surface. 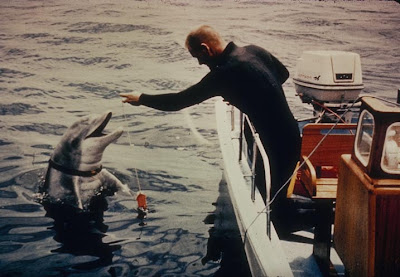 Each team spent 15 days in the habitat, but aquanaut/astronaut Scott Carpenter remained below for a record 30 days. During that time, he was able to speak with astronaut Gordon Cooper who was in the Gemini space capsule, orbiting the Earth. Also a congratulatory telephone call was arranged between President Lyndon B. Johnson and Scott Carpenter while he was still under pressure. The fact that Carpenter was breathing Helium-Oxygen made him sound unintelligible to operators. Much was learned about working in the ocean and contributions were made to a large number of undersea science and engineering disciplines. SEALAB II was no doubt a success and represented another large step forward in enabling human beings to live and work in a hostile environment. SEALAB II was designed, built, and outfitted at Hunter's Point Naval Shipyard in San Francisco at a cost of $850,000. It was designed to house ten men at a depth of 200 feet for 30 days. The habitat was 50' long and 12' in diameter, and included four separate areas: entry, laboratory, galley, and living spaces. Entry while on the ocean floor was from below the habitat, with divers emerging into the pressurized habitat through an open moon pool.

Construction of SEALAB II's cylinder end bell used technology ahead of its time. The large dish-shaped cap was formed from a sheet of one-inch thick flat steel placed over a die. In order to shape it, one hundred pounds of C-4 plastic explosive were distributed on the side of the blank opposite the die. The whole package-die, blank, and charge, weighing 60 tons total-was lowered 30 feet beneath the surface of San Francisco Bay where the explosive was detonated. In approximately .004 seconds the end bell was formed. Explosive metal shaping on this scale had never been attempted before. If you would like to see this end bell, visit the Naval Undersea Museum in Keyport, WA. 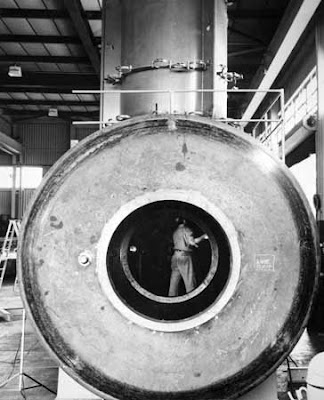 Note: This photo entitled "Bob-Barth-Scott-Carpenter-Sealab.jpg"; is a picture taken at the dive station on the support barge of Sealab Two, Bob Barth is shaking Wilbur Eaton's hand as he and Scott Carpenter are making ready to swim down to the house (they were the first two to leave surface). 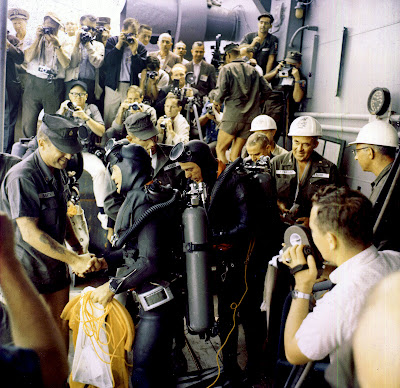 Posted by The United States Navy Experimental Diving Unit at 9:14 AM