On 13 September, after long and difficult salvage operations, SQUALUS was raised and towed into the Portsmouth Navy Yard. The boat was formally decommissioned on 15 November, renamed USS SAILFISH, and recommissioned on 15 May 1940. This operation took close to four months to complete, had many firsts and started only two days after the rescue (see This Day in Diving History sent May 21st).

The decision to salvage SQUALUS was made almost immediately. The Navy felt it important to raise SQUALUS as she incorporated a succession of new design features. With a thorough investigation of why she sank, more confidence could be placed in the new construction, or alteration of existing designs could be undertaken. Furthermore, given similar previous accidents, it was necessary to determine a cause.


HEO2 / SURFACE DECOMPRESSION
The salvage operation of the SQUALUS began on May 27, 1939 with the first operational helium-oxygen dive by Chief William Badders and first use of Sur-D procedures off of USS FALCON (ASR-2). This new breathing medium and decompression procedures were critical to the salvage operation due to the depth (240 feet). In the words of Commander Momsen: 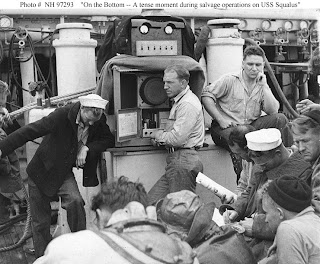 "The greatest single development produced on this job was the decompression system. Divers were brought by stages, calculated to be safe, to 50 feet. From this depth they were brought quickly to the surface, undressed and placed in a pressure tank within five minutes after surfacing. There he was fitted with a mask and given pure oxygen for a time sufficient to remove all of the excess gas from his body. Fifty feet of salt water is equivalent to 1-1/2 atmospheres of pressure which added to the atmospheric pressure gives us 2-1/2 absolute. At this pressure the blood stream can handle in physical solution just about the amount of oxygen that is required by the body. Thus the blood stream as transportation is free to carry the greatest amount of the helium away to the lungs. Since the solubility of a gas in a liquid varies as the pressure, at a pressure of less than 2-1/2 atmospheres, the carrying capacity of the blood would be reduced, hence it would take longer to remove the gas."

There were only 2 cases of the bends in the entire job with a total of 628 dives.

SALVAGE OPERATIONS
Many of the procedures used on previous submarine salvage operations (like the USS SKATE) would be used on the SQUALUS. Lifting pontoons were primarily used, but there are some significant differences that made the SQUALUS operation noteworthy. The salvage plan called for raising SQUALUS with pontoons and her remaining internal buoyancy. To accomplish this, the salvage was planned and conducted in three distinct stages. Unlike previous pontoon salvage operations, control pontoons limited the distance the ship was lifted in any single lift. The reason for this is when pontoons and the vessel's own buoyancy are used, the exact locations of the centers of gravity and buoyancy cannot be determined; thus one end always rises first. If the rise of the upper end is not constrained, a sharp angle will result and air will spill from open bottom ballast tanks. To prevent a sharp angle, SQUALUS would be lifted a short distance, towed submerged to shallow water, and lifted again. To limit the distance the submarine was raised on each lift, the pontoons were arranged at different levels between the surface and the submarine. When the uppermost pontoons reached the surface, their lift would be lost and SQUALUS would hang in midwater, supported by her internal buoyancy and that of the submerged pontoons. The upper pontoons were known as the control pontoons because they controlled the height of the lift (see attached PowerPoint slide). After weeks of grueling work both by divers and topside personnel, all was ready for the first lift. Commander Momsen described what happened: 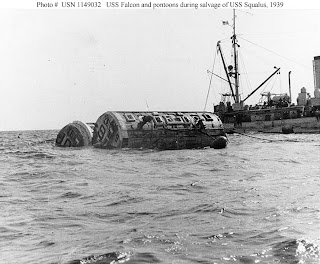 "At the end of fifty days work, the first lift was attempted. We raised the stern successfully then the bow. The bow came up like a mad tornado, out of control. Pontoons were smashed, hoses cut and I might add hearts were broken. It was the 13th of the month, July. Another 20 days of mopping up was required before we could again rig for another try. The second try was successful." 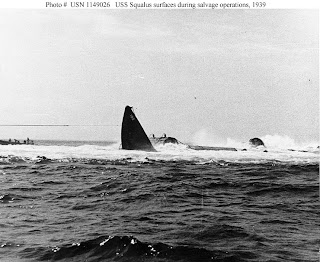 Pontoons were rerigged for the second lift so that more positive control over the bow was maintained. SQUALUS was raised 70 feet and towed toward Portsmouth until she grounded. The pontoons were rerigged for lifting in the shallower water and she was again lifted successfully and eventually towed to drydock (Sept 15, 1939); 113 days after it sank. The vessel was exactly one year old. 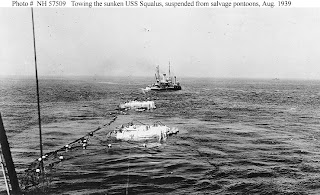 USS SAILFISH
After reconditioning, repair, and overhaul, the submarine was recommissioned and renamed USS SAILFISH (SS-192) on 9 February 1940. Once sea trials were complete, she departed Portsmouth on 16 January 1941 and headed for the Pacific. Transiting the Panama Canal, she refueled at San Diego and arrived at Pearl Harbor in early March. The submarine then sailed west to the Philippines, where she operated out of the Cavite Navy Yard with Submarines, Asiatic Fleet. She was in port when the Japanese attacked Pearl Harbor on 7 December 1941. SAILFISH conducted 12 patrols and would be awarded nine battle stars for her service in World War II Service. It is especially note-worthy that several of the SQUALUS survivors served aboard SAILFISH during some of these war patrols.
During the Pacific War, the captain of the renamed ship issued standing orders if any man on the boat said the word "Squalus", he was to be marooned at the next port of call. This led to crew members referring to their vessel as "Squailfish". That went over almost as well; a court martial was threatened for anyone heard using it.

President Roosevelt visited during the salvage operations and formally commended the "devotion to duty, courage, skill, initiative, and self sacrifice" of the officers and men who salvaged the sunken submarine. Every Navy Diver who worked on the SQUALUS received an award ranging Congressional Medals of Honor (4), to Navy Crosses (49), to citations from the Secretary of the Navy (4).

Books:
1. "Back from the Deep: The Strange Story of the Sister Subs Squalus and Sculpin" by Carl Lavo
2. "Blow All Ballast! The Story of the Squalus" by Nat Barrows
3. "The Terrible Hours: The Greatest Submarine Rescue in History" by Peter Maas

Note: SQUALUS/SAILFISH's conning tower stands today as a memorial to the lost crew of the USS SQUALUS at the Portsmouth Naval Shipyard. 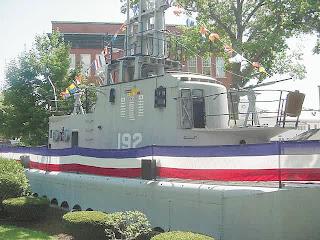