Opening day of Brooklyn Bridge showcased it as a symbol of American ingenuity. Its was the longest suspension bridge in the world and its two towers stood as the tallest structures in New York City and the entire western hemisphere for several years.

Construction began on January 3, 1870 with two granite block Gothic inspired towers to support its massive cables. One tower is located on the Manhattan side, the other on the Brooklyn side of the bridge. In order to anchor the towers to the East River, they were built atop caissons, which

were large wooden boxes with no bottoms. They were towed into position and sunk on the river bottom. Compressed air was then pumped into the chambers to keep water from rushing in, and men inside dug away at the mud and bedrock at the bottom of the river. As the stone towers were built on top of the caissons, the men beneath, dubbed "sand hogs," kept digging ever deeper. Once they reached solid bedrock, the digging would stop, and the caissons were filled with concrete, thus becoming the foundation for the bridge. To expedite the descent of the caissons, dynamite was used for the first time in bridge construction. These workers were paid wages of $2.25 per day.

Work inside the caisson was exceedingly difficult. The atmosphere was always dirty and misty, and as the caisson work occurred before Edison perfected the electric light, meaning the only illumination was provided by gas lamps. The "sand hogs" had to pass through a series of air locks to enter the chamber where they worked. After working long hours, as workers would quickly depressurize themselves through the locks; a strange phenomenon would commonly occur. Upon surfacing, workers would experience painful symptoms in their joints and about their bodies. This would cause them to limp in a manner that appeared similar to the "Grecian bend" (a dance for fashionable ladies of the era). Those affected with this ailment would be chastised by their fellow workers for "doing the Grecian bend". This was later shortened to simply "the bends" and is still used as a description for decompression sickness. Workers affected with the bends would experience some relief of the symptoms when they returned to work under pressure in the caisson the next day - although no one understood why at the time. Dr. Andrew Smith first utilized the term "caisson disease" describing 110 cases of reported decompression sickness (most cases weren't reported) as the physician in charge during construction of the Brooklyn Bridge. The project employed 600 compressed air workers. Recompression treatment was not used as it didn't exist. All in all, the foundations took three years to construct and cost 27 workers their lives. 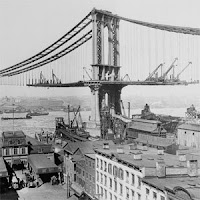 There were so many occurrences of the disease in the caisson workers, that it caused the halt of construction of the Manhattan side of the tower. This was 30 feet short of bedrock when soil tests underneath the caisson found bedrock to be even deeper than expected. Today, the Manhattan tower rests only on sand in 78 feet of water; the Brooklyn tower sits in bedrock in 44 feet of water.


The Brooklyn Bridge's opening ceremony was attended by several thousand people and many ships were present in the East Bay for the occasion. One week after the opening, a rumor that the Bridge was going to collapse caused a stampede, which crushed and killed twelve people. On May 17, 1884, P. T. Barnum helped to squelch doubts about the bridge's stability-while publicizing his famous circus-when one of his most famous attractions, Jumbo, led a parade of 21 elephants over the Brooklyn Bridge.

Books: To read more about the construction of the Brooklyn Bridge, check out "The Great Bridge" by David McCullough.

Posted by The United States Navy Experimental Diving Unit at 11:34 AM