The Navy's first deep-sea submarine salvage was of the USS SKATE (F-4), which was lost in approximately 51 fathoms (306 feet) while making a short submerged run off the island of Oahu, Hawaii, in March 1915. This was the Navy's first loss of submarine and crew. 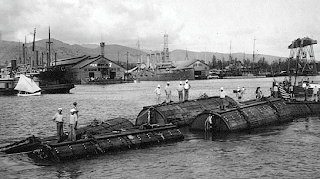 The F-4 had a length of 142 feet, with a submerged displacement of 400 tons and a designed depth of 200 feet. After the accident, an oil slick and air bubbles about 2 miles from the harbor entrance lead to dragging operations that positively located the boat; there were no apparent signs of life. The submarine lay far deeper than any divers had ever descended with existing equipment and methods. In and effort to reach the boat on the day of the loss; two Navy Divers dove to a depth of 190 and 215 feet, but neither reached or sighted the vessel. The only chance of saving any possible survivors was to drag the boat into shallow water because no lifting gear could be made and rigged in the time available. Dragging would work only if the boat was not completely flooded. Sweeps were made by the NAVAJO and INTREPID to pass a wire rope around the hull and drag it into shallow water. An attempt at this was made the following day, but the boat could not be moved. Rescuing the crew appeared hopeless but one more attempt was warranted. A dredge was brought to the scene; if a portion of the submarine remained unflooded and buoyant, there was a possibility of moving the boat into shallow water by heaving with the dredge and towing with tugs. No progress could be made (one of the wires parted at its maximum load). This answered the question whether the F-4 was filled with water -- it was, and rescue effort was regretfully concluded. 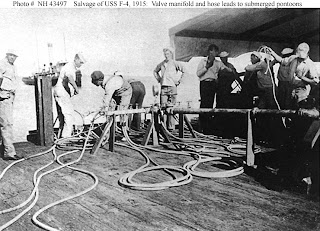 Because the F-4 was the Navy's first submarine loss, there was an intense desire within the Navy to determine the cause of the casualty. There was also a huge public outcry for the recovery of the bodies of the crew. Naval Constructor LCDR Julius Furer, who was in Hawaii for the construction of the new Naval Station at Pearl Harbor, was placed in charge of the technical side of salvage. After evaluation the situation and consultation with Navy Salvors, it was determined that multiple short lifts and tows were the only feasible way of raising the boat. Faced with a lack of specialized equipment for the job and a base under construction in Hawaii; Salvors were forced to do what they do best - improvise with what was on hand to get the job done. Two sturdily constructed 104x36 foot barges belonging to a local construction company had the strength to support the downed submarine. A lifting system was built using I-beams planned for a coal storage facility, sugar mill shafts were used as windlasses along with miscellaneous machinery that was either available or made for the job. 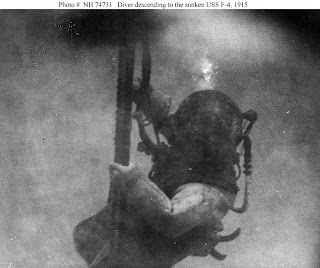 Knowing that the positions of the lift slings would be crucial to the success of the salvage and that their positions could only be verified visually, five of the Navy's top Divers were ordered in from the Navy Yard. At the time the Navy Yard was responsible for the test and review of all diving equipment and techniques. These divers were Gunner Stillson, Frank Crilley, Stephen Drellishak, Frederick Nilson and William Loughman. Chief Crilley made the first dive just two days after arrival. He reached the F-4, more than 300 feet down, and reported that the boat was upright but the slings would have to be moved. The difficulty of working at this depth cannot be overstated. Keep in mind that all of these dives were conducted with air -- breathing HE02 had not been discovered yet. The futility of attempting to work at these depths was demonstrated when a diver remained on the bottom for thirty minutes trying to pass a small reeving line. He was unaware of fatigue on the bottom, but collapsed from exhaustion on the surface and did not regain strength for several days. In another instance Chief Loughman became entangled in a steel hawser at a depth of 250 feet down breaking his hip in process. Loughman fell unconscious and GMC Frank W. Crilley dove in after him, disregarding personal safety. He found Loughman and worked for an hour and a half to free him. For his heroism, Crilley became the first Navy Diver to be awarded the Medal of Honor on February 15, 1929. For more info on this heroic rescue see the "This Day in Diving History" email sent April 17.

After multiple lifts over the course of months the submarine had been moved to 48 feet of water by June. The problem was now how to move her in one lift through Honolulu Harbor with out breaking the sub up which would totally block the harbor. It also had to achieve a depth of 25 feet or less to fit into existing drydocks. In order to accomplish this, Salvors developed what would be known as the submarine pontoon salvage method. To do this, chains were moved under the boat and attached to huge pontoons that were built for this operation. These pontoons were 32 feet long with a lifting capacity of 420 tons and were built with wooden sheething all around to prevent impact, chaffing, or puncture to the hull due to frequent contact. On 29 August, the pontoons were blown dry, the submarine was towed into the harbor and placed in drydock. It was immediately discovered that the cause of the accident was leakage through rivet holes where the rivets had been eaten away by battery acid. This resulted in immediate design changes to all U.S. Navy Submarines.

The methods, lessons learned, and equipment employed in this operation would be used during the raising of the USS SQUALUS (SS-192) years later. 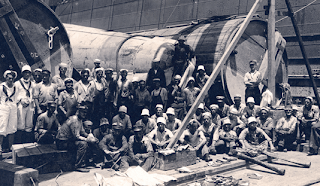 Note: For more reading about this historic salvage operation check out the following hyperlink to UnderSea Warfare Magazine