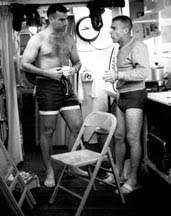 ROBERT SHEATS
Master Diver Robert (Bob) Sheats is one of many outstanding Navy Divers who have served at the Keyport Locker. He had many nicknames bestowed upon him during and after his career including "Master of the Master Divers". While this email showcases a few of his career highlights capturing everything he did would be impossible - the email would be pages upon pages in length. I had the opportunity recently to view his service record from the Navy Archives. To say that this man had an impressive career would be an understatement to say the least. The following outline merely three of his accomplishments.

POW
Master Diver Sheats enlisted in the Navy in 1935, qualified Second Class Diver in 1937 and within a few years became a First Class Diver. It was while serving aboard USS CANOPUS (AS-34) that he found himself in the middle of the Battle of Bataan (WWII -- Philippines). CANOPUS was pierside during one stage of the battle and was badly damaged by Japanese planes during one of the many bombing runs. Damage sustained prevented her from being able to get underway. Because CANOPUS was now a "sitting duck", her crew was forced to take refuge and fighting positions in the surrounding jungle - Sheats was placed in charge of a group of the crew now in defensive positions. Although they held out for quite a few weeks, eventually they were overrun and captured by the Japanese Imperial Army on May 6, 1942. Sheats wrote that while he had no desire to allow for his capture, he did so to preserve the lives of the men under him. Almost immediately he regretted it; due to the intolerable and brutal conditions WWII POWs faced when captured by the Japanese Army.

After being captured the team of Navy Divers (Sheats, along with 8 other Navy Divers), was forced at gunpoint to first build a diving air system (from scrap CANOPUS and submarine parts) and then dive for silver then worth over $8 million in 1942. This silver had been dumped overboard by a Navy ship in 120 feet of water when Japanese capture of the vessel was inevitable. The Japanese used the US Divers because they were the only ones that could build a diving system and had any knowledge of decompression procedures. The fact that the divers didn't have actual tables and was doing it based solely from memory was of no consequence to the Japanese; if the divers died they were only prisoners in their eyes. The silver was quickly found by the divers and was concentrated in one location. Sheats was smart enough to know that if the divers quickly recovered all of it (which they easily could have done), the Japanese would have no more use for them and would likely kill them all. He instructed the other divers to only recover small sums at a time - enough to make the guards demand more, but not so much that the well would "run dry". He also did this so he and his men would not be making large contributions to the Japanese war machine. All this occurred while he and his divers were suffering from starvation, dysentery and multiple injuries under the worst conditions imaginable. Additionally, Sheats and his men survived the Bataan death march, hell ship transport to Japan and forced slave labor in a Japanese mine until rescued after the Japanese surrendered.

His actions in keeping his men alive and focused unquestionably saved them until their eventual release on September 13, 1945 (3 years, 4+ months later). After his release he returned to duty as a Navy Diver without hesitation and would go on to achieve the qualification of Master Diver.

Years after he retired; the binder that the group of Navy Divers had used to hand write the design and compute gas formulas in building the makeshift dive system from scrap parts was found and reviewed. It also contained makeshift dive logs from the entire Japanese silver recovery operation. There were over 10 pages of formulas, all drawn from memory using hand jammed math - all without a single error.

SEALAB I
In 1964, Master Diver Bob Sheats was selected from across the fleet to serve as the Master Diver for SEALAB I. SeaLab I was a bottom habitat, saturation diving experiment whose purpose was to evaluate human ability to work under the water at moderate depths for prolonged periods. It involved four divers who remained under pressure for 11 days at 195 ft off the coast of Bermuda. The mission was a total success and conclusively demonstrated the feasibility of open-sea saturation diving. This success would not have been possible where it not for Master Diver Sheats working side by side with "Pappa Topside" Captain George F. Bond. Its success would not only prove open ocean saturation diving, but would set the stage for SeaLab II.

SEALAB II
One year later Master Diver Sheats would be involved yet again in an even bigger and much more complex saturation diving mission. SEALAB II also known as the "Tilton Hilton" (because of the slope of its landing sight) would occur at a depth of 205 ft off the coast of LaJolla, CA and last for 30 days. Because of its complexity and length compared to SEALAB I, three teams would be used with Master Diver Sheats serving as team leader for one of them. Whereas SEALAB I tested and proved the concept of saturation diving, SEALAB II provided evidence that useful work could be done. The Navy conducted physiological and psychological studies to determine man's effectiveness underwater for an extended period and conducted many operational tests.

Much was learned about working in the ocean and contributions were made to a large number of undersea science and engineering disciplines. SEALAB II was no doubt a success and represented another large step forward in enabling human beings to live and work in a hostile environment. This program ultimately even had a huge impact on the global economy. The SEALAB program provided the commercial diving industry with its most important tool in the exploitation of offshore oil and gas reservoirs: the ability to dive deep and stay there for extended periods of time. In the process, the Navy medical community extracted a wealth of physiological data from their human subjects.

TMCM(MDV) Robert (Bob) Sheats would retire from active duty after thirty years of service on July 1, 1966 having accomplished in one career what most could not over the course of 4 lifetimes. Master Diver Sheats last eval write up that his record found in his record reads as follows:

"SHEATS has a long and varied career in diving with a well rounded background which he puts to use in most cases of diving. This aids in completing diving jobs in minimum times. His long career has made him set in his ways and sometimes his methods of sternness may be construed as belligerency towards his superiors but it is believed that his interests are for the good of the diving navy. During the last three months SHEATS has been assigned TAD with SEALAB II and received the Legion of Merit for his accomplishments. He also received special commendations from the Project Chief and the Navy Commendation Medal for SEALAB I. Because of SHEATS's long career his is extremely effective in all phases of diving and is capable of leading any team of divers on any assignment. He is demanding but gets the most out of his men."

Bob Sheats would continue to serve as a consultant in the Washington State area until he passed on March 9, 1995. His family still lives in the area.

Note: To read more about Master Diver Sheats POW experience, check out "One man's war: Diving as a guest of the Emperor, 1942" by Robert Sheats. I would personally call this required reading for all Navy Divers.

Attachments: Apologize for the small size of some of them. It seems Master Diver Sheats didn't exactly seek out cameras to get his photo taken. :)

Posted by The United States Navy Experimental Diving Unit at 11:19 AM