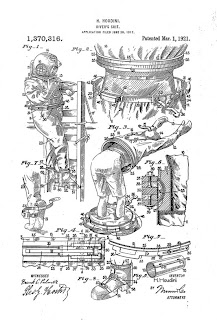 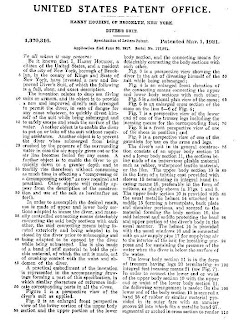 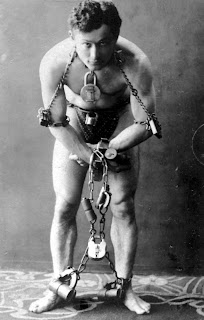 The early Navy Diving Rigs were not near as safe as the ones we have today.  Human powered compressors could and did fail....rig flooding resulted in a much higher rate of fatalities than what we currently experience.  These types of casualties occurred in a much more cumbersome, heavy diving dress that was not equipped with a secondary air source or EGS.
In 1921 Erich Weiss - better known as Harry Houdini, obtained a patent on an improved diving suit.  This was in response from concerns from the Navy that a Diver was unable to escape from his diving dress and perform a free ascent in the event of bad air, failure of the compressor to maintain over bottom pressure, flooded helmet/suit, entanglement or a host of other problems.  Who else to figure out how to escape from a perilous underwater situation than Harry Houdini himself?  The object of Houdini's diving suit was to allow a diver to get out of the suit while underwater in case of emergency.  It also allowed a diver to don his suit without assistance.  It accomplished this by being formed in two halves, with a locking joint in the middle.  The diver could reach this joint and release it, and then escape from the suit.  The idea never gained traction however due to the increased risk of flooding the suit.

Note:  As well as being a world famous escape artist, Harry Houdini was a trapeze performer, inventor and the first successful aviator to make a controlled powered flight over Australia.