This Day in Diving History -- 70th anniversary of the sinking of the USS SQUALUS (SS-192)
23 May 1939 -- 70th Anniversary of the sinking of the USS SQUALUS (SS-192)
The rescue and salvage of the USS SQUALUS (SS-192) was and remains the greatest submarine rescue/salvage in naval history world-wide bar none. Not only were 33 people pulled from the clutches of the deep, but several diving platforms/techniques were proven operationally at the great risk of the Navy Divers involved that are still in use today. This was one of Navy Diving's finest hours and each and every Diver should know this story cold.
On March 1, 1939 the Navy commissioned its then-newest submarine, the USS SQUALUS (pronounced "sk-way-lus" not "sk-wall-us"). Named for a small shark with a reputation of "a big bite," she was the pride of the Navy. She was of newer, larger design with state of the art amenities such air conditioning; the SQUALUS had been installed with every safety feature the Navy could think of. Despite these technological advantages, she suffered a catastrophic valve failure during a test dive off the Isle of Shoals at 0740 on Tuesday 23 May 1939. 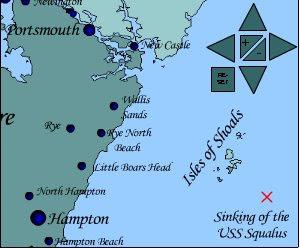 Partially flooded, the submarine sank to the bottom and came to rest keel down in 240 feet of water. SQUALUS was initially located by her sister ship, USS SCULPIN. The two submarines were able to communicate using a telephone marker buoy until the cable parted due to high seas. Navy Divers and salvage ships responded quickly (NEDU happened to be on the pier at Portsmouth, New Hapshire getting ready to do at-sea testing of their new Helium-Oxygen diving tables), getting on station and attaching a downhaul cable (240 fsw on air) to ready the rescue effort. The following day, operations commenced to rescue the surviving 32 crew members and one civilian from the forward sections of the boat. At 1130 on 24 May, USS FALCON (ASR-2) lowered the newly developed McCann rescue chamber -- a revised version of a diving bell invented by Commander Charles B. Momsen -- and, over the next 13 hours, all 33 survivors were rescued from the stricken submarine. There were five total runs in the McCann rescue chamber with Chief Badders and/or PO1 Mihalowski being involved in each run. Each run took between 2-3 hours to complete. The rescues official Navy report stated that:
"These men were fully aware of the great danger involved. If they became incapacitated, there was no way in which they could be rescued, as the chamber could not be entered from the outside. Considering all facts, it is felt that these men accepted the greatest personal risk of any during the entire rescue operations, and performed their duties in accordance with the highest traditions of the service." 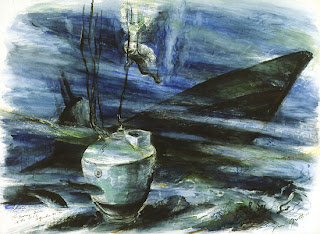 The Navy felt it important to raise the SQUALUS as she incorporated a succession of new design features. With a thorough investigation of why she sank, more confidence could be placed in the new construction, or alteration of existing designs could be undertaken. Furthermore, given similar previous accidents, it was necessary to determine a cause. The salvage operation of the SQUALUS started only two days after the successful rescue and had many firsts including the first operational helium-oxygen dive by Chief William Badders on May 27, 1939 and first use of Sur-D procedures. The SQUALUS salvage operation is every bit as impressive in magnitude as the rescue was, but that is another story for another day.
For their actions, the following divers would receive the Medal of Honor;
. MMC(DV) William Badders
. TM1(DV) John Mihalowski
. MEC(DV) James Macdonald
. BMC(DV) Orson Crandall
These would be the only CPOs to receive this honor during the interim years between WWI and WWII. 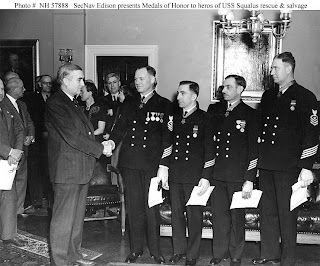 Note: This historic moment in Navy Diving history has been captured in quite a few books as well as a NBC made for TV movie called "Submerged". Her conning tower serves as a memorial at Portsmouth Naval Shipyard. A few notable books are;
1. Blow all Ballast by Nat Barrows
2. Back From the Deep by Carl Lavoe
3. **The Terrible Hours by Peter Maas**
4. The Rescuer also by Peter Maas
5. Lost Subs by Spencer Dunmore