17 July 1996. TWA 800 (747) flying enroute to Europe exploded in mid-air and crashed into the Atlantic Ocean near East Moriches, New York, shortly after take off from Kennedy International Airport.

All 230 people on board (two pilots, two flight engineers, 14 flight attendants, 212 passengers) were killed as the aircraft was completely destroyed. In the face of one of the worst airline disasters in recent American history, the Navy quickly embarked on one of its most ambitious salvage and recovery efforts, which ranked in scope with the recovery of the Challenger space shuttle in 1986 and the cleanup after the bombing of Pearl Harbor in 1941. In the first weeks after the crash, Navy Divers focused on its first priority: the recovery of human remains. When no more remains were visible, Divers collected pieces of the plane by hand and piled them into metal baskets which were then turned over to investigators. The wreckage would then be reconstructed and examined in a hangar at a Grumman facility in Calverton, N.Y. 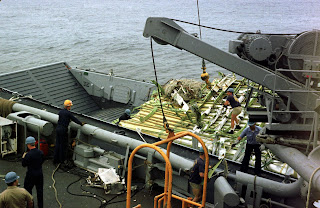 Hundreds of square miles of ocean surface were searched during the initial search for victims and wreckage. Underwater efforts concentrated first on a 75 square mile location and then narrowed to a 25 square mile debris field. Diving operations took place between 115 and 130 feet deep in 50-degree water. Visibility on the ocean bottom was normally between 12 and 15 feet but was reduced to zero during periods of heavy weather and current. Within the first week, Navy divers had found and recovered both the flight data recorder and the cockpit voice recorder. For the first month, the Divers were working around-the-clock shifts of 12 hours on and 12 hours off and recovered more than 50% of the aircraft's wreckage. During the 104 days in which the major Navy assistance took place, four Navy ships and ROVs along with more than 225 Navy Divers from across the Navy conducted the recovery. 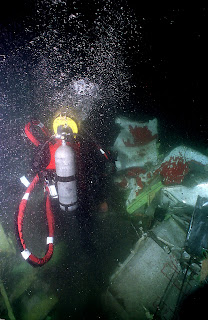 All in all, 4,344 dives were conducted during the recovery operation (1,773 total diving hours) that retrieved more than 95 percent of the jumbo jet and the remains of the 230 victims.

Navy officials and other investigators called the salvage operation a remarkable success because nearly all of the wreckage from the Boeing 747 was retrieved from 120 feet of water, the most debris ever recovered from a commercial jet that crashed at sea. The recovery of these debris allowed investigators to uncover the cause of the crash. These discoveries lead to upgrades and procedures for aircraft still in use today to safe-guard against such an accident happening again. 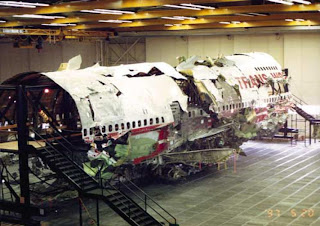