July 14, 1969 8:56 P.M. -- The Ben Franklin (PX-15) subsurface research vessel left surface off Palm Beach, Florida on a 30-day drift mission in the Gulf Stream with a crew of six. Its final destination would be 1500 miles north off of Yarmouth, Nova Scotia. The vessel was named in honor of Benjamin Franklin who recognized, publicized and named the current "The Gulf Stream" in 1770. 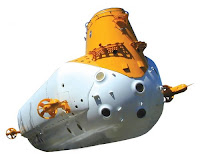 Its Mission: to investigate the secrets of the Gulf Stream as it drifted northward at depths of 600-2,000 feet; to learn the effects on man of a long-duration, closed-environment stressful voyage; to demonstrate the engineering-operational concepts of long term submersible operation; and to conduct other scientific oceanographic studies.

This mission would be the longest privately-sponsored undersea experiment of its kind. It ended more than 30-days (and 1,444 nautical miles) later, when the Franklin and its crew of six surfaced some 300 miles south of Halifax, Nova Scotia on August 14, 1969 at 7:58 A.M. This was and remains an unparalleled feat -- no other mesoscaph has gone for a more extended or deep drift type mission. All that being said; here is why many have likely never heard of it. The Ben Franklin was greatly overshadowed by the Apollo 11 man on the moon mission that was launched only two days into the Franklins historic mission. Ben Franklin made a few more dives after 1969, including the first deep-sea dive for Dr. Robert Ballard, the discoverer of the wreck of the Titanic. Dr. Ballard said he has fond memories of the Franklin, as its large size and comfortable bunks gave him his best "sleep in the deep." Usually, submersibles are small, cramped and you spend hours in contortions with cold water from condensation dripping on you. Recently, the Ben Franklin was overhauled and preserved to be displayed at its final resting place where it proudly sits at the Vancouver Maritime Museum.

The following is an excerpt from the documentary "From Sea to Shining Sea" narrated by Walter Conkrite; regarding the Ben Franklin and its place in history:

"Timing is everything. In the summer of 1969, within one day of each other, two courageous crews set out to explore new frontiers. Both were missions of pure discovery. One would go to the Sea of

Tranquility, the other to the massive eastern boundary current known as the Gulf Stream. One would completely obliterate the other in the world's awareness. For eight days in July, the world looked skyward, transfixed, as Apollo 11, with three astronauts aboard, rocketed to the Moon. No one noticed the launch of PX-15. Manned by six brave aquanauts, the mission of PX-15, in the mesoscaph Ben Franklin, endured a perilous 30 day, 1400 mile drift-dive deep in the Gulf Stream. Though regarded as an analogue to prolonged missions in space, it was little remarked and all but forgotten at the time. The achievements of Apollo 11 have since become a celebrated event in human history; the astronauts are American heroes. The achievements of PX-15 and her crew were never noticed, and remain in oblivion. While the world looked up toward the Moon as the Eagle tracked over the rugged terrain of the Moon and landed, the 50' Ben Franklin was drifting at 1200 feet, 40 feet off the bottom of the Continental Shelf, taking stereoscopic pictures of equally rugged terrain. While the astronauts walked and worked on the Moon nearly 240,000 miles away, the aquanauts carried out their mission under crushing pressures between 800 and 2000 feet deep in the ocean. The danger to both missions and both crews was extreme, with little margin for error and very little hope of recovery in the event of an accident or emergency. Yet, one returned to the accolades of an adoring world, while the other returned to the notice of almost no one. The coincidence of the Apollo 11 moon mission and the Ben Franklin Gulf Stream Mission in 1969 is a strange and rare historical event, one that involves two of my favorite subjects - space and ocean exploration." 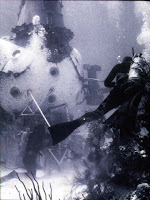 Within a few years, the frontiers explored by Apollo 11 and PX-15 were abandoned and a golden age of human exploration came to an end. Sending something into the unknown has now largely replaced sending someone. As you hear about the 40th anniversary of the Apollo 11 moon landing, keep in mind the contributions of the Ben Franklin.

Posted by The United States Navy Experimental Diving Unit at 10:25 AM