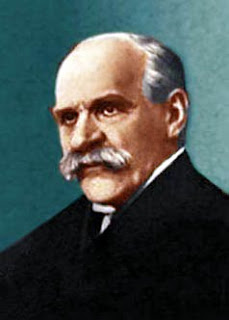 ACCEPTANCE BY THE U.S.
The U.S. was slow to adopt Professor Haldane's stage decompression procedure, but had great interest. In 1912, George D. Stillson set up a program to test Haldane's diving tables and methods of stage decompression in the Long Island Sound. Prior to these tests, Navy Divers rarely went deeper than 60 fsw. Throughout a three-year period, first diving in tanks ashore and then in open water from the USS WALKE (DD 34), Navy Divers went progressively deeper, eventually reaching 274 fsw (all on air). Before this the believed safe diving limit was 120 feet but these experiments pushed that limit to around 200 feet. Mixed gas diving would not be discovered for another 27 years but would push this depth limitation well beyond that of air.

ASCENT RATES
Haldane's original staged decompression model recommended ascent rates between 5 and 30 feet per minute dependant upon depth. This was later modified to a rate of 25fpm which remained in effect from 1920-1957. Then in 1958, while revising the U.S. Navy Diving Manual, this rate of ascent came under review. Commander Fane of the U.S. Navy West Coast Underwater Demolition Team wanted rates for his frogmen of 100 feet per minute or faster. The hardhat divers, on the other hand, considered this impractical for the heavily suited divers who were used to coming up a line slowly (usually 10 feet per minute). Thus, a compromise was reached at 60 feet per minute, which was also a convenient 1 foot per second for time/record keeping. This 60 feet per minute rate lasted in the Navy from 1957 until 1993, based on this purely empirical decision, with many recreational diving tables and even early computers following suit. In recent years the ascent rate has been slowed to 30 feet per minute as research has shown this rate helped to better guard against illnesses associated with diving such as decompression sickness and gas embolism...it seems Mr. Haldane had it pretty close to start with. 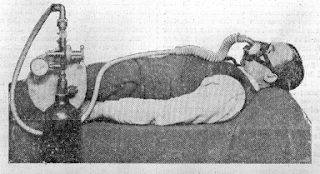 A few other notable FAQ about John Scott Haldane:

1. He was heavily involved in experiments involving the effects of certain gases on the body. One of these gases; Carbon Monoxide affected not only divers but miners and other workers. He was the first to research the effects of CO on the body by breathing it in himself until it saturated his blood, nearly costing him his life. "At the end I could hardly stand and could not walk alone without falling down" he noted. His research revealed the mechanics behind CO poisoning which became known and "the Haldane effect".

2. During the First World War (1914-18) Haldane was asked to identify the type of gas that the Germans had used in the first gas attack of the war. Haldane found it was chlorine. In order to protect the soldiers, Haldane designed the first gas masks, which proved better than the urine-soaked handkerchiefs that the soldiers had used at first. Haldane also demonstrated the value of oxygen in treating soldiers when they were gassed.

3. He introduced the use of small animals for miners to detect dangerous levels poison gases underground, using either mice or canaries. The reason for this (aside from their portability) was that they have a faster metabolism. This faster metabolism causes them to show symptoms of poisoning before gas levels became critical for workers, giving an early warning sign. The use of canaries was used until 1986 when the method was replaced by the electronic gas detector.

4. Haldane led an expedition to Pikes Peak in 1913 to examine the effects of low atmospheric pressure on respiration. His work here also revealed that decompression sickness was not limited only to divers and miners. He also discovered that the respiratory reflex is triggered by an excess of carbon dioxide in the blood rather than a lack of oxygen.

5. Like his experiments involving Carbon Monoxide, Haldane would routinely experiment with toxic and non-toxic gases on his own body. Despite all the benefits these experiments would yield, years of doing them would eventually take its toll on his lungs. John S. Haldane would die of Pneumonia in 1936 and is still remembered as the father of modern decompression theory.

Note: To learn more about John Scott Haldane and his work check out "Suffer and Survive: The Extreme Life of JS Haldane" by Martin Goodman.