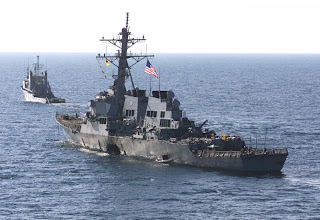 Eleven months before the events of September 11, the USS COLE (DDG-67), was on deployment enroute to Bahrain. In need of fuel, the Arleigh-Burke class destroyer entered the harbor of Aden, Yemen for a scheduled refueling. After the mooring of the ship to a buoy, the refueling operation began. Approximately 45 minutes into the refueling (11:18 a.m.), terrorists detonated a small boat packed with explosives on the port side of the ship. The explosion ripped a 1,600 square foot hole in her hull, killed 17 Sailors and left 39 wounded.

In the aftermath of the explosion, the crew of the COLE fought tirelessly to free sailors trapped by the twisted wreckage and limit flooding that threatened to sink their ship. The crew's prompt actions to isolate damaged electrical systems and contain fuel oil ruptures prevented catastrophic fires that could have engulfed the ship and cost the lives of others. Skillful first aid applied by the crew prevented additional deaths and eased the suffering of many others. The crew conducted more than 96 hours of sustained damage control in conditions of extreme heat and stress. Deprived of sleep, food and shelter, they vigilantly battled to save the ship and restore stability to vital engineering systems. This superhuman effort kept the ship afloat although it remained highly unstable. During these efforts, initial hull searches for additional explosive devices on her were carried out by EOD that were deployed in the area. As these initial searches were being conducted, a detachment of Navy Divers was brought on scene and tasked with locating the missing Sailors, ship stabilization, evidence recovery, structural inspections and assistance in loading her on a heavy transport ship that would eventually bring her home.

The first challenge would be to stabilize the ship. The COLE was listing to port, had no electrical power and was still flooding in several compartments. To do this, a surface supplied diving system was set up onboard the COLE which would allow divers to route through multiple decks and compartments for extended periods of time. Diving in enclosed spaces is dangerous enough; adding to this would be diving in a medium of both water and fuel, around shattered bulkheads, buckled decks and a spider web of broken pipes and wires – all in zero visibility with water and air temperatures ranging from 90 to 110 degrees. Once setup was complete, Navy Divers were able to systematically identify, isolate and effectively stop remaining flooding into the ship. In process they recovered several bodies of fallen crew members and successfully stabilized the ship. Once these immediate stability concerns were met, Navy Divers moved to the blast area itself in order to inspect the area, gather evidence and recover remaining crewmember remains. The blast area on the ship was nothing less than devastating. Noticeable to the world was the immense opening in the hull. Even more disturbing was the level of damage inside the ship. Divers had to be even more careful in this area to ensure they did not cut themselves or their equipment on countless shards of metal. Slowly and methodically, they inspected every inch of the blast area. Through these continued efforts, evidence was gathered about the explosion for investigators and all of the missing COLE Sailors were recovered. These sailors were given full military honors as they were escorted off the ship to begin their long and final journey home. 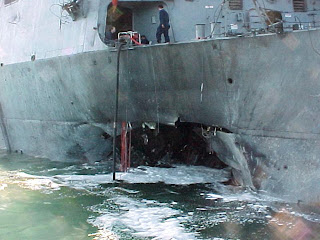 With the recovery phase completed, inspection dives were conducted so that naval engineers could determine how much of the COLE's structural strength had been lost. The Blue Marlin, a 700-foot-long Norwegian heavy-lift transport ship, was contracted to return the COLE back to the United States. To accommodate the COLE, the Blue Marlin was fitted with special docking blocks that would hold her in the most stable position for the long voyage. The fleet ocean tug USNS Catawba towed the COLE out to deeper waters approximately 23 miles off the coast of Yemen on 29 October. Loading the COLE onto the Blue Marlin required calm seas and a water depth of at least 75 feet. The Blue Marlin partially submerged as tugs maneuvered the COLE into position over the transport's deck. Navy Divers then guided the damaged destroyer into position as the Blue Marlin raised up in the water to meet the ship. The entire docking evolution took almost 24 hours to complete. The Blue Marlin, with the COLE securely held on her deck, began the transit back to the United States. 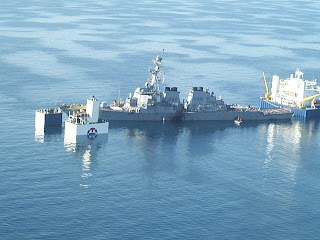 USS COLE was off-loaded Dec. 13, 2000, in a pre-dredged deep-water facility at the shipyard of Northrop Grumman Ship Systems. After a successful 14-month effort to repair the damage, USS COLE returned to Naval Station Norfolk on April 25, 2002. She would deploy to the Middle East for the first time since the bombing in June 2006. While passing the port city of Aden the crew manned the rails to honor the crewmembers killed in the bombing. 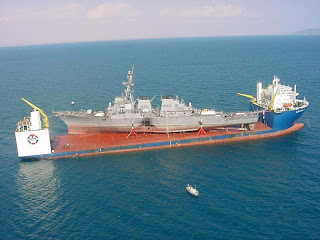 Abd al-Rahim al-Nashiri is alleged to be the mastermind of the USS COLE bombing and other terrorist attacks, who headed al-Qaeda operations in the Persian Gulf and the Gulf states prior to his capture in November 2002 by the CIA. He is currently in American military custody in the Guantanamo Bay detention camp. In December 2008, he was charged before a Guantanamo Military Commission. The charges were dropped in February 2009 pending the Obama administration's review of all Guantánamo detentions, but may be refiled. 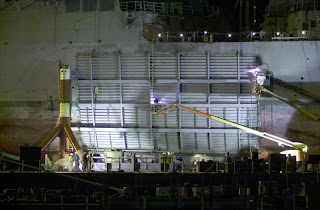 Posted by The United States Navy Experimental Diving Unit at 9:49 AM