This Day in Navy History -- The Navy's 234th Birthday 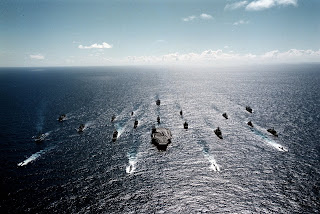 The United States Navy traces its origins to the Continental Navy, which the Continental Congress established on 13 October 1775, by authorizing the procurement, fitting out, manning, and dispatch of two armed vessels to cruise in search of munitions ships supplying the British Army in America. The legislation also established a Naval Committee to supervise the work. All together, the Continental Navy numbered some fifty ships over the course of the war, with approximately twenty warships active at its maximum strength.

After the American War for Independence, Congress sold the surviving ships of the Continental Navy and released the seamen and officers. The Constitution of the United States, ratified in 1789, empowered Congress "to provide and maintain a navy." Acting on this authority, Congress ordered the construction and manning of six frigates in 1794, and the War Department administered naval affairs from that year until Congress established the Department of the Navy on 30 April 1798. The Navy would continue to expand and challenge other countries for sea dominance up to World War II. During WWII, the United States become by far the largest Naval power in the world, with over 70% of the world's total numbers and total tonnage of naval vessels of 1,000 tons or greater. Throughout the rest of the 20th century, the United States Navy would maintain a tonnage greater than that of the next 17 largest navies combined.

The Navy's original six frigates were:
1) USS UNITED STATES - Launched on 10 May 1797; decommissioned and placed in reserves in 1849 at Norfolk, Virginia. While in lay-up she was seized and commissioned into the Confederate States Navy, which later scuttled the ship.

2) USS CONSTELLATION - Launched on 7 September 1797. In February 1800, Constellation fought the French frigate La Vengeance and won the first major victory by an American-designed and built warship. After she was struck from service Some timbers were re-used in the building of the second ship to bear the name USS CONSTELLATION.

3) USS CONSTITUTION - Launched on 21 October 1797 and remains the oldest commissioned vessel afloat in the world. The word "afloat" is important because as the HMS Victory lays claim to being the oldest commissioned vessel in the world, she is not seaworthy. Nicknamed "Old Ironsides" because cannonballs of the day could not penetrate her tough oak sides. Today she is still berthed at Charlestown Navy Yard, in Boston, Massachusetts where visitors tour her daily. 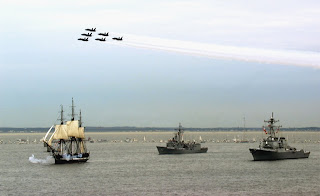 4) USS CHESAPEAKE - Launched on 2 December 1799. Served with distinction until 1 June 1813 when she was captured by HMS Shannon and taken into Royal Navy service.

5) USS CONGRESS - Launched on 15 August 1799. During the War of 1812, she captured or assisted in the capture of twenty British merchant ships. Put in reserve in 1813 and served the remainder of her career as a classroom and training ship.

6) USS PRESIDENT - launched on 10 April 1800. In September 1813, USS PRESIDENT captured the schooner HMS Highflyer. Soon thereafter she herself was captured in January 1815 by a Royal Navy squadron. Re-Commissioned as HMS President, she was broken up at Portsmouth, England in 1818.

Characteristics of the original USS CONSTELLATION:

44-gun Frigate with 2,200 tons displacement. Propulsion was by sail (three masts) that could reach a top speed of 13 knots. She berthed 450 officers/enlisted including 55 Marines and 30 boys.

Characteristics of the new Gerald R. Ford class aircraft carriers:
101,600 tons displacement. Propulsion - nuclear (2 reactors) that can reach a top speed of 30+ knots. She will berth 4,660 personnel will come equipped with surface to air missiles, close in weapons systems and will carry more than 75 aircraft.