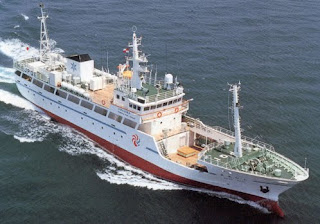 February 9, 2001 -- 13:43......about 9 nautical miles off the south coast of Oahu, Hawaii; while conducting an emergency surfacing maneuver, the USS GREENVILLE (SSN-772) collided with the Ehime Maru Japanese fishing vessel. This was part of a demonstration for some civilian visitors, onboard USS GREENVILLE. As the submarine surfaced, it struck Ehime Maru, slicing her hull wide open from starboard to port. Within minutes of the collision, Ehime Maru quickly sank and hit the bottom at 2,000 fsw. A total of 35 people were on board Ehime Maru; 20 crewmembers, 13 students and two teachers. Coast Guard vessels quickly responded and rescued 26 crewmembers. These crewmembers were taken to Oahu for immediate medical treatment, but the remaining nine crewmembers remained missing. 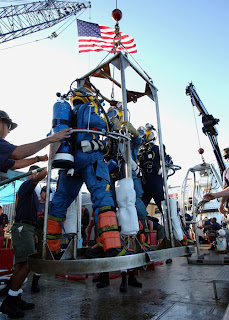 On 16 February 2001, the Supervisor of Salvage and Diving (SUPSALV) and Submarine Development Squadron 5 (SUBDEVRON 5), using the Scorpio remotely piloted underwater vehicle (ROV), located Ehime Maru in 2,000 feet of water. After assessing the technical feasibility and environmental impact of raising Ehime Maru from the ocean bottom, the U.S. government decided to proceed with its recovery. The decision was made not to raise Ehime Maru all the way to the surface but to lift and carry it underwater to a shallow location (115 ft) one mile away from Oahu. Once there, Navy Divers could enter the ship, on 15 October 2001 they did just that. Divers were tasked with five specific mission objectives: 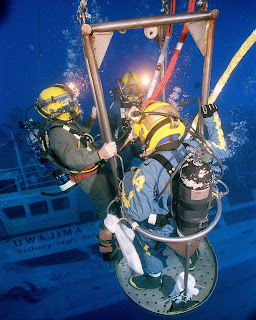 1. Recovery of the 9 mission crewmembers
2. Collection of personal effects 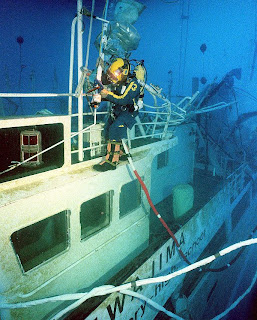 3. Recovery of unique shipboard items
4. Performing hazardous liquids and material removal
5. Rigging the ship for movement to the final relocation site after 1-4 was complete

In order to accomplish this volume of work in a timely manner, divers ran two deep sea dive stations simultaneously. Inside the ship there was sharp metal, destroyed bulkheads, fuel, wire and debris fouling any sort of passage. Despite this and low-to zero visibility, divers located and recovered eight of the nine missing crew members. In the course of searching four of her decks, they also cleared 120 compartments recovering over 2,500 personal and unique shipboard items. A technique called a "hot-tap" was used to drain the ships fuel tanks completely of 45,000 gallons of lube oil and diesel fuel. This prevented any loss of hazardous pollutants to the environment. An estimated two tons of debris would be removed by divers in order to rig the Ehime Maru prior to moving her back out to her final deepwater resting place. After the recovery was complete, on 25 November, Ehime Maru was lifted, towed back out to sea, suspended about 90 feet below the towing barge, and scuttled in over 6,000 feet of water 12 nautical miles south of Oahu where she rests today. 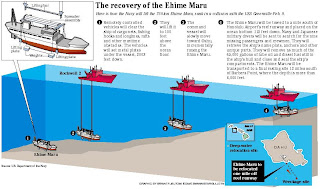 All in all Navy Divers conducted over 650 dives during the course of 29 days. This operation not only gave closure to families and recovered sensitive items but it also only helped avoid future ecological damage due to the fuel. The use of military assets to complete this also went a very long way in public support and U.S./Japanese relations in that it showed genuine concern vice simply throwing money at the problem. 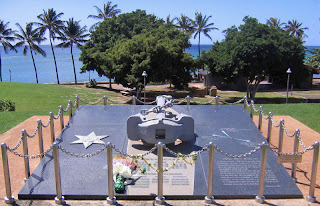